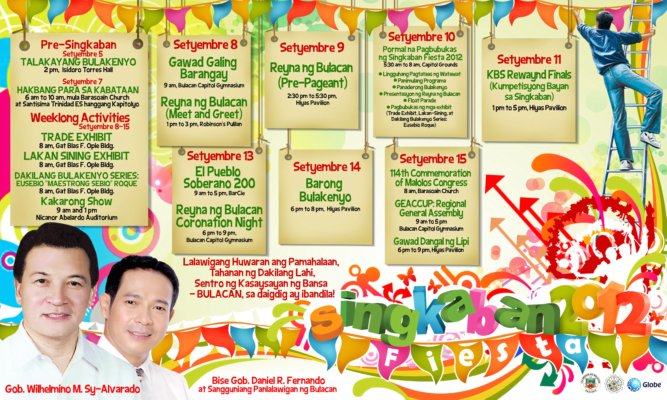 If I did not pursue our plan to go out yesterday I wouldn’t have known that Singkaban 2012 is in full bloom in our city’s capitol! A trade fair is in the works + a lot of exhibitors, with products ranging from native kakanin, leather products, clothes, among others, joined in the festivities near the Capitol compound. Even the provincial Capitol is in a festive mood, adorned with lights + colorful decorations + bustling with activities. Anyway, although I did not get to browse around much on the shops, much more buy anything I fancied, it was one afternoon well spent as me + the little man wanders around the park as well as that little park in front of the Capitol building {sorry I do not know what they call it!}.

The park was full of people that afternoon, mostly students from the nearby Bulacan State University + some others who probably wants to join in on the fun at the fair. Other days, the park stage would be busy with a Balagtasan or a dance contest, but the programs have probably ended when we arrived as it is almost 5pm when head out the door.

For those who are in the dark, * Singkaban is the common name for Sining at Kalinangan ng Bulacan, which Bulakeños celebrate during Linggo ng Bulacan {September 8-15}. It is a week-long + province-wide celebration comprised of various colorful cultural presentations, arts + skills competition of Balagtasan + Kundiman, art + culinary exhibits, + capped by the prestigious Dangal ng Lipi Awards Night. This is a festival of arts + culture honoring the Capitol’s patron saint, Our Lady of Victory.

Anyhoo, here is the complete list of activities for Singkaban 2012 in case any of you will be interested to participate:

Hopefully we’d be able to participate in any of the Singkaban 2012 activities before they end. I definitely miss dabbling into these cultural preoccupation which I used to do when I was still a student ~ watching local plays at Hiyas Auditorium + checking out art exhibits. I also miss watching cultural programs, with traditional dances + music, with students clad in their Filipiniana costumes + others playing string instruments like the bandurya, or even ukelele. Sure is a fun + enjoyable show to watch.
Anyway, our wonderful afternoon stroll that day merits another post altogether so I’ll tell you all about next time! 😉
* Source: Wikipedia. org.