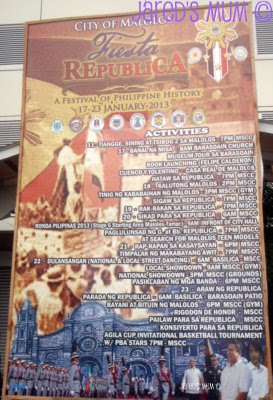 My brother, Ken, invited me to watch him play with The Hiyas ng Bulakan Symphonic Band and since we do not have an activity lined up last Monday, I eagerly agreed.

We arrived at the Malolos Convention Center a little before 5pm, it was drizzling that afternoon so we had to wait for the sky to clear before heading out. The area was bustling with activities. It turned out Fiesta Republika 2013 was being held that day and students from neighboring provinces of Laguna, Cavite, Pampanga, Tarlac and Nueva Ecija joined in to participate in the contest dubbed as Dulangsangan, where they reenacted our forefathers’ fight for the country’s freedom from Spaniards all those many years ago. It was in fact a special non-working holiday in our city and the town mayor just announced that the President has  just proclaimed 23 January as a working holiday for the rest of the country, too, to commemorate the glorious day of our very first republic. 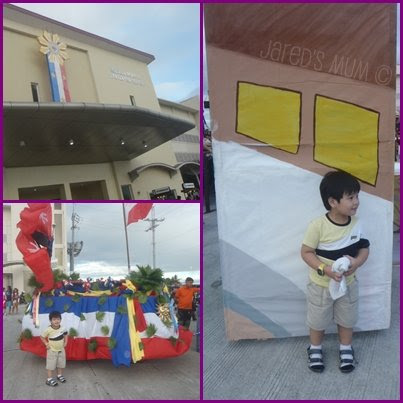 A little trivia:  the First Philippine Republic was formed in Malolos through the Malolos Congress. During those times, people from nearby provinces, especially those included in the 8 provinces, who where later represented in the 8 rays of the sun in our National Flag, who first revolted against the Spanish regime would come down to celebrate and play at the Barasoain plaza {or whatever it is they call it during those days}.

There were large groups of people gathered around the makeshift stage, so the little man and I decided to go and look around, instead, and headed to check out the carnival next. We’ve  passed by this place on a few occasions and the little man would never fail to point at the Jollibee-inspired ride. He was excited to try it, so off we went.After our Jollibee ride, the little man was pointing to the ferris wheel ride beside it. But, I thought he wasn’t ready for this ride just yet so I convinced him to back to the event and check out the program. It was such a relief that he agreed! 😉 We got back just in time for the awarding of winners for the Dulangsangan contest earlier and I was delighted to to hear that my alma mater, Marcelo H. Del Pilar High School, won the local contest. The province of Pampanga won first place along with the hefty P500,000 cash prize. 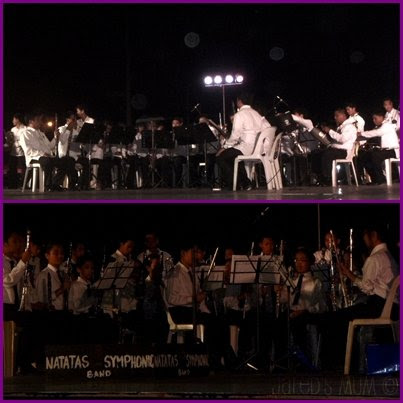 Before the symphonic band competition at 7pm, my son and I got a chance to check out the convention center for a bit more exploring. Jared enjoyed going up and down the bleacher several times before we decided to went back to the flurry of activities outside. All of the chairs in front of the makeshift stage were almost occupied, good thing I manage to secure one for me + the little man. The competition started around 8pm and 5 different bands, from the provinces of Cavite, Pampanga, Nueva Ecija, Batangas and Bulacan competed for the P150,000 grand prize. Each of the bands played a traditional song, a modern song, and the contest piece, Lahing Kayumanggi.

My usually rowdy and rambunctious little one was all tired and running low on battery by the time the second band played. He agreed to sit on my lap and was dozing off to dreamland after a few minutes. It was a bit late, but since my brother’s band was yet to perform, I decided to finish the program to watch them and find out who won, too.

I can listen to symphonic bands all day. They have this soothing, relaxing and music in any form is just a source of delight. My efforts of staying out this late with my son was rewarded when my brother’s band won the grand prize!

Looking forward to the next Fiesta Republika!