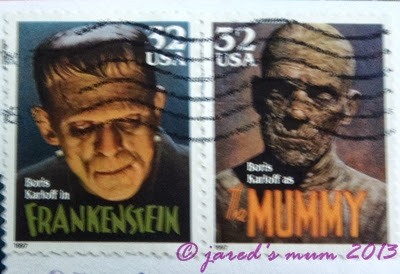 It is a free theme for this week’s Sunday Stamps and since it is a few days to go before Halloween, I decided to share with you these famous scary characters. You’ve probably tried dressing up like them in one of those Trick or Treat events you’ve attended.

The first stamp features Mary Shelley’s unforgettable character Frankenstein, which was brought to life by the actor Boris Karloff in the 1931 film adaptation. He then played The Mummy in its own film adaptation a year later. 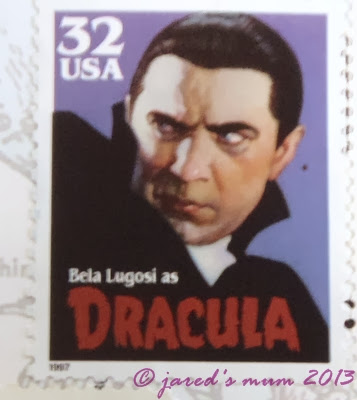 This last stamp, on the other hand, features another well-known character, Bram Stoker’s Dracula, who was brought to life by Hungarian-American actor, Bela Lugosi, in its original film adaptation in 1931.

I do not know what was it about the 1930’s and scary films, but I would love to see these original films in black and white, if given the chance. It would be amazing to see how they brought these extremely terrifying characters with the limited technology at their disposal. By the way, these stamps came with a bunch of US State map cards, which I shall share in my upcoming posts!

Oh well, I do hope you have a pleasant week ahead and do share some Halloween-related stamps or postcards you might have stashed somewhere! 🙂

11 thoughts on “Halloween Characters on Stamps”