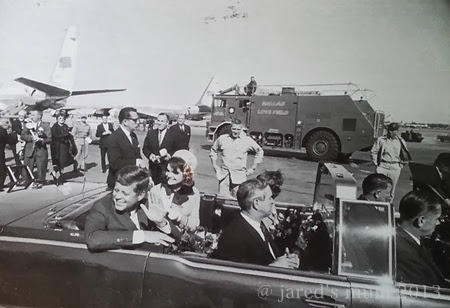 Important historical figures are also interesting postcard theme and quite a delight to collect. That is why I am delighted that one of my swapmates agreed to send me this John F. Kennedy postcard. I received it about a week ago and rather timely, too, as today marks the 50th anniversary of his assassination in Dallas, Texas. Ironically, this postcard came from The Sixth Floor Museum at Dealy Plaza in Dallas.

John F. Kennedy, or JFK as he was fondly called, is probably one of them most renowned political figure in the history of United States. He was the 35th US President, the second youngest President ever elected, and the only Catholic, too. He also holds the record of being the only President to have won the prestigious Pulitzer Prize.

The back of the card says:

Postcards like this are really quite a treasure, that is why I thank Arnold very much for sending it to me. I hope local wholesale printers will consider producing similar cards, probably featuring Ninoy Aquino and similar celebrated figures in Philippine History.