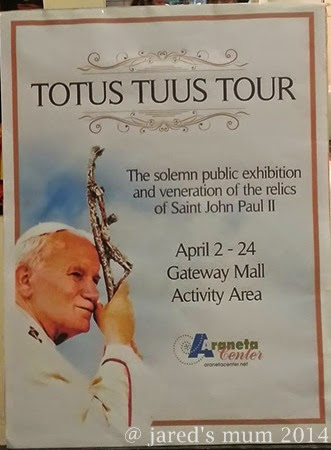 I chanced upon the Totus Tuus Tour while doing some online works the other night. I have a soft spot in my heart for Pope John Paul II, as am sure most Filipinos have. Unfortunately, I never had the chance to see him during his previous Philippine visits when he was still alive, the last of which was the World Youth Day in 1995, where I volunteered as an usherette in my school where local and foreign delegates in Bulacan were to stay during the duration of the event. So I thought I wouldn’t miss the exposition and veneration of his relics. This is rather timely for the Lenten Season, too. 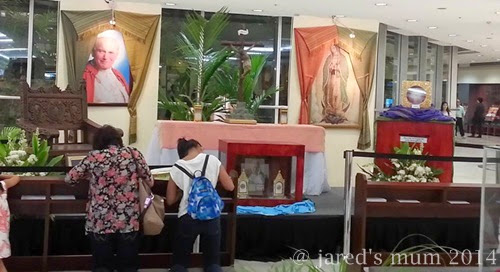 This tour is in celebration of our beloved Pope’s canonization slated on 27 April of this year. This is organized by the Office of the Vice Postulator for the Cause for Canonization of Bl. Ivan Merz.
I had the chance to see the exhibit over the weekend while I was in Manila to attend an event. The Totus Tuus Tour has a number of exhibitions around the city and in nearby provinces, with the most accessible one found at the Activity Area of Gateway Mall in Cubao. 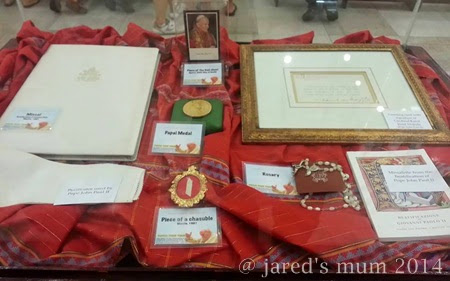 On display are first class relics, including hair strands and cloth imbued with blood,  and important memorabilia of Pope John Paul II, including a piece of his bed sheet  he used at the time of his death in April 2005, a missal he used during the beatification of San Lorenzo Ruiz in 1981, a purificator he once used, and a piece of a chasuble he used during his 1971 visit.
Apart from the exhibition, faithfuls and other visitors can also recite prayers at the mini altar, as well as write their prayers and intentions and donate, too. 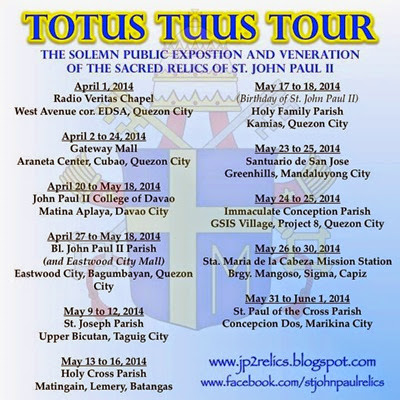 The exhibit at the Gateway Mall will be up until 24 April. Meanwhile, you may also check out the other venues and dates for the Totus Tuus Tour here: http://jp2relics.blogspot.com/
Check here for more photos I took of the exhibit.