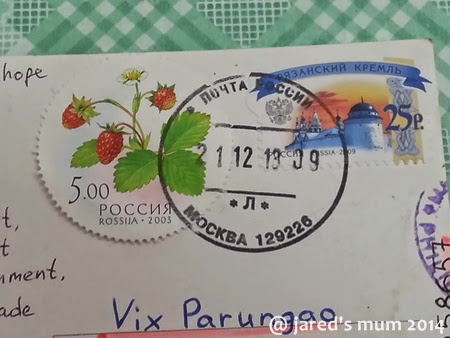 It has been awhile since I have shared about my stamps. This week’s theme is all about stamps from Russia and since I do not have the privilege of time to rummage through my box full of postcards, I will just share most of the recent stamps I got from that region. Mind you, I have not been active the past few months with my Postcrossing.com swaps and focused mainly on personal swaps, so I was not getting a lot of postcards from Russia lately. 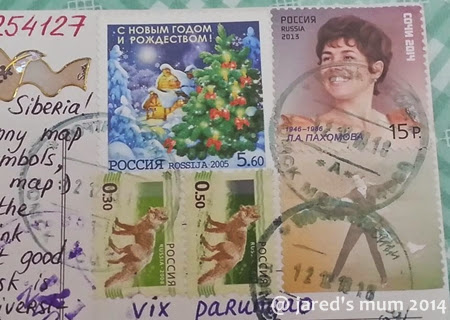 Anyway, here are a bunch of stamps I did get from the previous postcards sent to me from Russia. That first image features a very interesting strawberry scented stamp. It was my first time to received a scented stamp and I was really delighted to get it. It did actually smell like strawberries and I am surprised that it managed to retain the smell despite of the distance it has to travel. This stamp sure bring a big smile on my face. The stamp beside it is the Novgorod Kremlin, located on the left bank of Volkhov River in Veliky Novgorod. This stamp is part of the Sixth Definitives series – Russian Kremlins – Novgorod Kremlin issued in 2009.

The second image, on the other hand, features a number of interesting stamps, too, starting with a very cute New Year stamp. The stamp on its right features Lyudmila Pamokhova {1946-1986}, a Soviet ice dancer, a figure-skating world champion and a sport legend in Russia. This stamp is part of a set released in 2013, featuring other Russian sports legends. This group of stamps also include these animals, which can either be a fox or a dog.