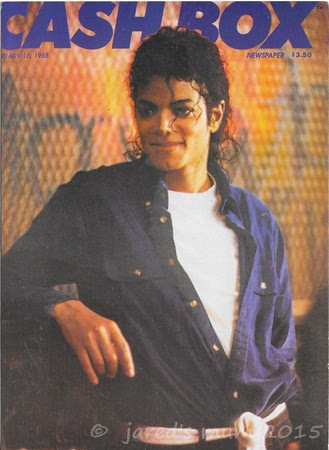 I really like famous personalities on postcards, although I do not have a lot in my collection. I swap with friends from everywhere whenever I find something of interest and here is but another one of my favorites among the few people in postcards I have collected.

Michael Jackson is one of my favorite artists, so when the opportunity to swap for a couple of his postcards arrived, I grabbed it instantaneously! This card features Michael Jackson of the late 80’s and the early 90’s {you know how his looks have changed drastically over time}. I thought he is one person that needs no further introduction as we all know who he is and what a brilliant singer/songwriter/performer he was during his time. After all, he will never be dubbed as the “King of Pop” for nothing.

Among my favorite Michael Jackson hits are “Remember The Time,” “Rock With You,” “Heal The World,” and his iconic “Thriller,” and “Billy Jean.” From what I remember he performed in Manila for a couple of times but I was not lucky to catch any of those shows. They were huge hits among Filipinos and people will always remember how Michael fired up the stage like no one else did. He’s got dazzling fireworks, larger than life production numbers, breathtaking musicality and instruments like amplifi and a whole lot more, the works! It would’ve been an experience of a lifetime to have been in one of his shows in the Philippines.

Michael Jackson’s family released a posthumous album in memory of the King of Pop, but I have mixed emotions about the project. Those were a collection of his unreleased music and I thought they have remained unreleased for a reason. I do not think Michael will be happy for the world to hear what he has not intended to release to the public in the first place. But that is just my two cent!

Thank you, Arnold for sending this MJ card, i really love it!

Do you also love Michael Jackson and what is your favorite MJ hits? Would you love to have this card in your collection, too? 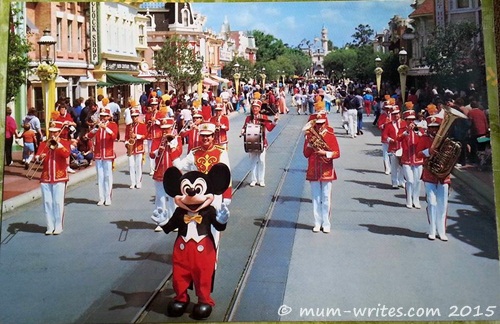 Leader of the Marching Band!

Walt Disney is one of my favorite postcard theme, I guess I cannot help it as I have a 5-year old who consumes Disney like crazy. I have accumulated a number of Disney themed cards in my several-year collection and this one is one of the newest I have received. Well, not really new as I got it last year but I have since been inactive with my Postcrossing.com swaps and am no longer getting and swapping postcards on a regular basis, unless I absolutely love the cards for swap, that is!

This lovely Mickey Mouse card was sent by Jan from the US. She was very thoughtful to put the card in an envelope so that I can receive it in the best of conditions and I really appreciated that! The card, aptly called Leader of The Band, features one of many’s all-time Disney characters, Mickey Mouse, as he takes over the drum major to lead the Disneyland Band in a Main Street Concert. Their band plays an assortment of music, from waltzes to marches, and probably also has a member who owns this nice tenor sax case I saw online.

This official Postcrossing.com was sent to the little man and he is more than delighted to add this to his growing collection. Oh well, it is probably about time to reactivate our Postcrossing.com accounts and start swapping for beautiful cards again!

Do you have a Mickey Mouse postcard, too, I would love to hear all about it in a comment below! Happy postcrossing!