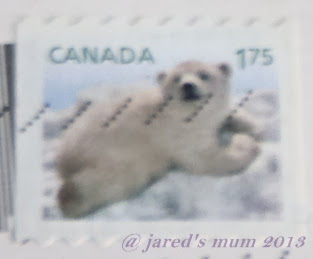 sorry for the blurry photo, my camera is wonky again 🙁

For this week’s Sunday Stamps, we are to share anything about the Arctic or Antartic. Only one thing actually came to my mind ~ polar bears! So I set off to rummage through all my postcards to check if I have anything polar bears and I guess it was my lucky day as I have found this lovely polar bear, which comes from a postcard sent to me from Canada by a friend. 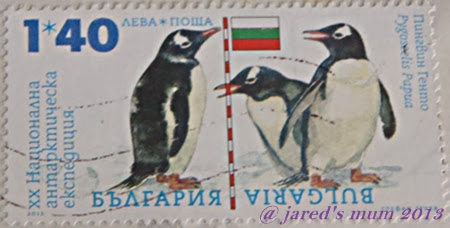 These set of stamps, on the other hand, depict the Gentoo Penguins from Bulgaria {scientific name: Pygoscelis Papua}. It came with a colorful map card of Bulgaria. 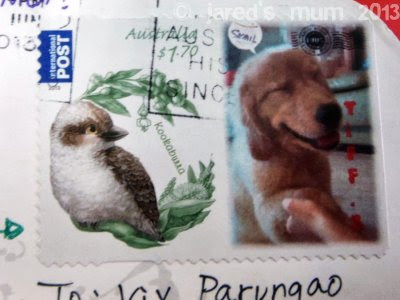 I have been meaning to organize my stamp photos in an album and create a separate posts for each of them, but alas, I have not found the time, until now. I was online, anyway, so I thought why not make one of those stamp posts I have been wanting to do for the longest time now. 🙂

For starters, here is a very lovely photo of a Kookaburra and a little puppy stamps! Aren’t they the cutest? I got them from a Gotochi card that I received from Australia earlier this month. I fell in love with the puppy at first glance. The Kookaburra, on the other hand, are tree kingfishers native to Australia and New Guinea. They normally thrive in the wild and are most known for their call, which almost sounds human laughter. Did you know that one of the three mascots chosen for the 2000 Summer Olympics in Sydney is Olly the Kooraburra? I just wish we have the same kinds of animal stamps in the local Post Office.

Anyway, I will sure be back for more of my stamp posts, which I am scheduling every Sunday just in time for the Sunday Stamps meme 🙂