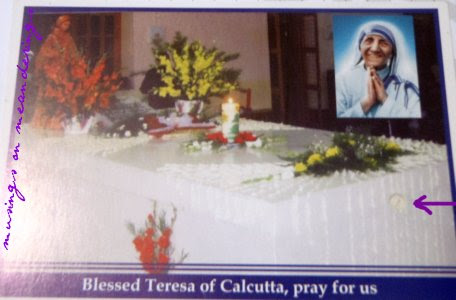 At one glance you won’t notice anything extraordinary in this card, but upon closer scrutiny you’ll see a piece of cloth that peeks from a tiny hole in the right part of the card. This is actually a relic or a piece of cloth which was touched to Mother Teresa’s tomb. This is also believed to be miraculous + those who get hold of it are encouraged to report any favors, graces or miracles that they received through the intercession of the Blessed Teresa of Calcutta. A mailing address for the Postulation of the Cause of the Canonization of Blessed Teresa of Calcutta is also found at the back of the card.

Mother Teresa, born Agnes Gonxha Bojaxhiu on 26 August, 1910 in Skopje, was well-known + well-loved by many for her kindness + generosity. For 45 years, she tended to the orphaned,the poor, the sick + dying, + would’ve probably seen the most number of people in scrub pants, visiting hospitals + orphanages with the Missionaries of Charity,which she founded. She was awarded the Nobel Peace Prize in 1979 + the  first Pope John XXIII Peace Prize. After her death in 1997, she was beatified by Pope John Paul II, thus earning her the new title, Blessed Teresa of Calcutta.

Mother Teresa is really an inspiration to all of us + miraculous or not, I will really treasure this card, which I got from our May 27 Postcrossing Meet-up, by the way.