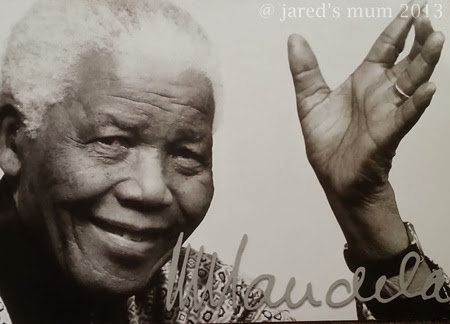 I received this postcard late last year briefly before it was in the news that Nelson Mandela has already passed away. He was one influential and inspirational personality that people from different parts of the world and different walks of life mourned his death and celebrated the full and meaningful life he led.

Here is a brief trivia about Nelson Mandela from Wikipedia:

Nelson Rolihlahla Mandela {18 July 1918 – 5 December 2013} was a South African anti-apartheid revolutionary, politician, and philanthropist who served as President of South Africa from 1994 to 1999. He was South Africa’s first black chief executive, and the first elected in a fully representative democratic election. His government focused on dismantling the legacy of apartheid through tackling institutionalized racism, poverty and inequality, and fostering racial reconciliation.

Mandela was a controversial figure for much of his life. Denounced as a communist terrorist by critics, he nevertheless gained international acclaim for his activism, having received more than 250 honours, including the 1993 Nobel Peace Prize, the US Presidential Medal of Freedom, the Soviet Order of Lenin and theBharat Ratna. He is held in deep respect within South Africa, where he is often referred to by his Xhosa clan name, Madiba, or as Tata (“Father”); he is often described as “the father of the nation”.

This is a great addition to my collection of postcards of interesting people in history. Thank you Ruhan for sending this card from South Africa, my very first from that country!